Commercial airlines love in-flight entertainment (IFE) because it is one of the cheapest and smallest value-adds for customer satisfaction. Moving maps and in-flight DVDs scale very well, while lie-flat beds and revamped food and beverage menus cost money and valuable real estate. 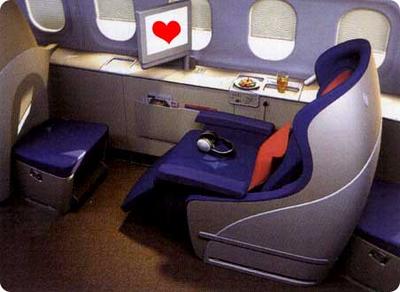 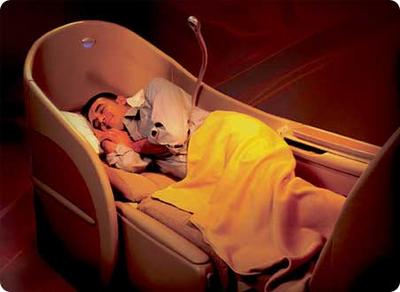 FlatSeats.com, run by Skytrax Research, has a great flat seats photo gallery. A little more exploration leads us to their cabin interior photos from various airlines, inevitably peppered with LCD screens like this one.

If you haven't seen the Boeing 777-200LR Flight Test Journal, take a look. We really enjoy following the certification progress of an amazing new aircraft. 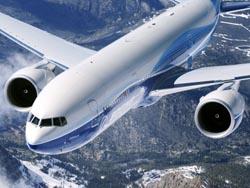 A quick search for information about on-board IFE for the 777-200LR yields this little tidbit:

Later in the afternoon, in the final report of the day, LeBeau walked viewers through the business class and showed the "huge" 15-inch screens set into the seat backs. With a remote control passengers can choose among a variety of movies and other entertainment on those long-haul flights.

15" entertainment LCDs on aircraft seatbacks is a very big deal! We are starting to take these for granted on international flights. Even there, the industry standard seems to max at 10". Full article here, but no equipment pictures.

Only half-jokingly, I am considering some marketing slogans for an In-Flight Entertainment trade group.

I think that these are all really positive, boredom-killing statements that strain most international travellers without seatback screens.

What is upstart Kingfisher Airlines betting its fleet of A320-200's on? (Besides India's booming market economy.) You guessed it: In-flight Entertainment.

The carrier's in-flight entertainment is expected to be the biggest crowd-puller, as it would be the only airliner ferrying in the (Indian) domestic sector having an in-cabin entertainment system.

All Kingfisher aircraft have been equipped with a personal video screen for every seat, with 10 channels of audio and five channels of video in every seat screen with personalised headphones. Even though in-flight entertainment is the norm in international flights, this is the first time an Indian airline servicing only on domestic sectors would provide this kind of entertainment.

But Kingfisher takes it one step further. 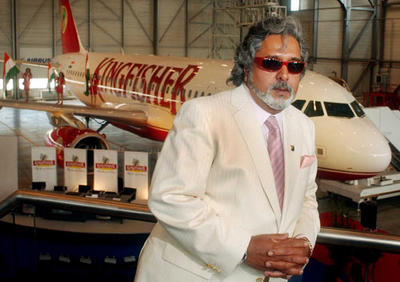 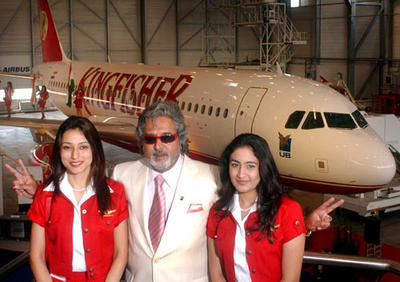 Look at him ham it up and wave the geo fingers! Those pretty call center babes are totally excited to join their American sisters in flight service. Kingfisher is, after all, one of India's largest beer brands.

This article from India's Economic Times draws the link between in-flight entertainment and making an airline "look young and appealing."

NEW DELHI: The 71-year-old Maharaja of Indian skies is now taking off on a major image building flight. With competition from domestic rivals and international majors growing by the day, Air India has appointed an independent image consultant to help rejuvenate ‘Brand Air India’ and emerge a global airline of choice.

The exercise involves revamping every customer touch point, from reservation counters to in-flight entertainment and interiors.

“With Air India fast moving towards acquiring 50 new planes, our fleet would be among the youngest in the world in a year’s time. We are trying to make the brand look young and appealing,” said a spokesperson.

Full article here. Special thanks to Mumbai reader Akshay for the Air-India clarification!

Something Entertaining in the Air - PC WORLD

This review pertains to commercial aircraft in-flight entertainment, but I thought it made some good points about the airlines being forced to differentiate their products based on the quality of on-board IFE.

Some airlines are cutting back on the peanuts; others are giving you a reason to bring your own popcorn.

"For me, the most interesting thing is what JetBlue inaugurated with its live satellite feed," says David Stempler, president of the ATA. "That means I can watch CNN live on air. You really get the feeling you're never out of touch."

Similarly, Delta's two-year-old "high-style, low-fare" Song airline is offering 24 channels of Dish Network satellite programming, including NBC, CNN, E, The Movie Channel, and Travel. The airline also offers 24 channels of MP3 audio programming, the ability to create individual playlists from its programming, ten pay-per-view movies (at $5 a pop), as well as video games and a trivia game that allows you to compete against other passengers--all delivered to your own LCD screen on the back of the seat in front of you. Frontier Airlines offers 24 channels of DirecTV programming, although it costs you $5 per trip leg for the privilege.

Wireless at 30,000 Feet
Just last month, Boeing added a streaming television service that lets you watch four channels on your laptop. That's on top of its high-speed wireless Internet service, Connexion by Boeing, which launched in May 2004, and is now available on Lufthansa, SAS, ANA, Japan Airlines, Singapore Airlines, and China Airlines.

Read the full article at PCWorld.com by Cathy Lu.

This article from Elliott Aviation - Consulting seems to be an informative marketing piece. It has a few good quotes about cabin entertainment.

Custom is the operative word
Mark Wilken, Avionics Manager for Elliott Aviation points out an important fact. "The first thing to remember about in-flight entertainment and communications equipment is that almost every system is custom designed to give you what you want ­ the way you want it. Seldom is the same system in two different aircraft cabins exactly the same."

There are many video monitor systems, 5-inch to 20-inch screens, bulkhead mounted or located at individual seats -­ some are even hidden and powered into view by an electric motor. Displays are normally liquid crystal, providing bright, colorful pictures with excellent side-view clarity...

But Airshow is probably best known for its colorful moving map displays. Maps using actual satellite images give passengers a realistic view of their flight terrain. Colored according to vegetation, these maps are a mirror image of the earth's geography. Moving maps can be customized to enhance specific routes. Topographical maps use geopolitical borders, city names and points of interest to present a detailed picture of the aircraft's current location.