In a direct pitch against Boeing's Connexion service, which can cost over $1 million for installation, AirCell is planning a low-cost broadband connection for commercial airlines.

The AirCell Broadband System is unique in that its method of connectivity is via an air-to-ground link. Connexion by Boeing uses fuselage-mounted satellite antennas to beam your in-flight internet from the aircraft to a fixed satellite in outer space. These satellite connections are typically very expensive; AirCell currently offers in-flight phone service for business aviation at the rate of $1.99 per minute.

"If you look at what our demonstration program achieved technologically and consider the applications we'll enable for airlines and travelers, the possibilities are only limited by your imagination. During the demonstration flights, it was exciting to watch people experience the system for the first time and hear them come up with more and more ways they could use it," stated Jack W. Blumenstein, AirCell Chairman and CEO.

A vice president from a domestic, low-cost airline noted, "We've always been intrigued by the concept of airborne wireless broadband, but the satellite-based systems just aren't viable for our fleet in North America." He continued: "What AirCell is doing with their system changes everything -- it provides the speed and capabilities you need at a cost that's very workable. This opens up a world of potential applications for internal airline operations as well as passengers." 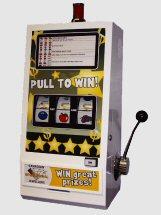 We talked about it earlier in the October news tidbits when the World Poker Exchange partnered with US Airways.

Now we hear that Ryanair plans for an online casino by Christmas 2005.

The airline has revealed that it is now set to launch an online casino that will operate in tandem with a new in-flight entertainment service. The facility is designed to give a further boost to the airline's fast-growing ancillary revenues. Plans are at an advanced stage to launch the virtual casino before Christmas...

Ryanair is Europe's biggest budget airline. Based in Ireland and founded in 1985 by Irish businessman Tony Ryan, the company's chief competitor is easyJet.

Their CEO was on record in 2004, wishing for top-margin IFE.

"I don't know who would stop you. It is like duty-free; you are in international waters," he told reporters.

While it is some time away, O'Leary said the technology does exist to adapt the airline's new in-flight entertainment systems for the use of gambling with credit cards. He described the revenue potential as "enormous".

Update 1 - Some facts, courtesy of this report.

Inflight gambling.. is currently being offered by Swissair and a few other airlines. The U.S. Transportation department says inflight gambling could generate $480 million a year for international airlines. However, gambling is currently banned on U.S. airlines and international carrier flights traveling in and out of the U.S. The tremendous profit potential makes it likely that U.S. carriers will lobby for legalization.

eFlyte intends to provide airline passengers a fun, challenging way to pass time on long flights, with the added bonus of accumulating winnings while relaxing at 35,000 feet. The system will have strict player controls, with access by the swipe of a credit card which will be credited or debited in the same way as any other credit card transaction. Continued Morgan, "The idea is to provide airline passengers with a low-stakes gambling environment that will co-exist with movies, audio tracks and even our own casual games." 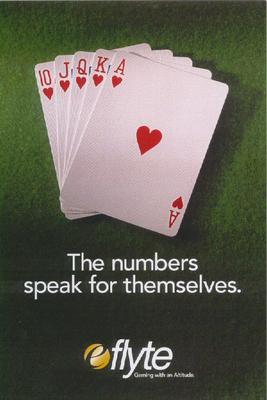 Update 3 - It seems that every news source in the world was quoting a blurb from Ryanair Chief Executive Michael O'Leary last week, where he predicted that "revenue from inflight gaming and gambling could eventually do away with the need to charge air fares." What rubbish!

Media outlets who picked up this little huge press stunt include USA Today - Ryanair says all may fly free if gambling pays off and MSNBC - Airlines: Ryanair's Gamble, by Martin Stabe.

Results released last week show that Ryanair's "ancillary revenues" grew by 40 percent, to 129 million euros, in the six months ending in September, and now account for 14 percent of all revenue. Currently, the airline earns extra cash from commissions on hotel and rental-car reservations and by selling advertising space on its aircraft.

Will passengers spend their travel time playing slot, blackjack and poker machines? Some analysts are skeptical, given that earlier this year the airline scrapped plans for charging passengers for television consoles due to lack of interest. "The low-cost sector in Europe has developed in a way that you don't get anything for free," says Andrew Lobbenberg, an ABN AMRO analyst in London. Ryanair chief financial officer Howard Millar defends the company's novel approach: "You don't have to buy a drink onboard, you don't have to gamble, you don't have to take a car rental from us; it's all entirely discretionary."

Developed by Hamburg-based Lufthansa Technik's Innovation Engineering "skunk works," the screens come in three sizes - 15in, 20in and 30in – and are destined primarily for the VIP cabin conversions in which the company specialises.

The screens will be on display in the section of the Lufthansa Technik booth dedicated to the NICE Ethernet-based cabin network, which is operational in a number of VIP Boeing BBJ2s and 747-400s.

Visitors to the Lufthansa Technik booth in Orlando should look out for a number of other Innovation Engineering products, including a wireless access point (WAP), the AirTrack moving-map system (in conjunction with TEAC Aerospace of the USA), and an audio/video-on-demand inflight entertainment server for corporate aircraft.

Shephard Group has the full scoop. We will be on the floor in Orlando for the 2005 NBAA show in November.

We've been out of pocket lately, so apologies for a lack of updates!

In-flight gambling, folks. Make your investments in this sector soon.

Boeing Co. said that it will not use a wireless network to deliver in-flight entertainment on the 787 "Dreamliner" plane because of problems involving plane weight and the technology. A wireless network would add 200 pounds per plane, rather than 50 pounds for a wired network. Also, Boeing could not get permission to use certain wireless frequencies from some countries, spokeswoman Lori Gunter said.

The new Thales TopSeries i-8000 uses a wireless network to deliver DVD-quality video to each seat on the airplane. Recognizing the importance of this (weight savings!), Boeing is recommending the TopSeries i-8000 to its commercial customers as preferred IFE equipment.

"By working with our airline customers to understand their in-flight entertainment needs, we clearly identified many tangible benefits of a wireless system," said Mike Bair, vice president and general manager of the 787 program. "Customers will be more comfortable as we are eliminating much of the equipment that typically is housed under their seats. In addition, we are saving weight and cost while providing a very high quality of service."

A breakdown of each Thales TopSeries in-flight entertainment system, by model: