Here is a video that the software company Qt produced featuring one of their customers, Panasonic Avionics. Panasonic is talking about their IFE system and how this Qt software enables them to focus on the design of the IFE, and not get bogged down in memory layer and/or operating system details.  ¶ 10:39 PM 4 comments

An anonymous source (KingOfIndiana) told us today that JetBlue is currently in serious negotiations to spin-off LiveTV as a separate business entity. Lawyers for JetBlue and LiveTV are currently meeting in New York City to iron out the details. JetBlue purchased Melbourne, Fla.-based LiveTV for $81 million in 2002. That transaction included $41 million in cash and the assumption of $40 million of LiveTV debt.

On April 22, 2008, we stated that we were considering a range of strategic alternatives for our LiveTV business, which provides in-flight entertainment systems and data connectivity services for commercial aircraft operated both by us and by third parties. We further stated that it might be a few quarters until we have prioritized our options regarding these alternatives. Morgan Stanley is serving as our financial advisor. We cannot predict the outcome of our consideration, or whether it will result in the occurrence of any transaction.

Interesting idea to bring the Apple App Store concept to IFE. Wonder if it is for Applications (such as Moving Maps) or for content (such as TV shows).

The Panasonic Avionics App Store is intended to bring the energy and excitement of the rapidly expanding open platform application developer community to airlines and passengers worldwide. Panasonic has chosen CoKinetic Systems to help with the implementation of the application store.

“There is a huge community of developers creating really rich and exciting content for smart phones and computers that can be brought to the IFEC industry under the right conditions,” says Panasonic CEO Paul Margis. “The Panasonic Avionics App Store will support this community of developers using widely available tools and processes to create many different types of application, from traditional maps, games and user interfaces to revenue generating transaction applications for merchants and airlines.”

CoKinetic CEO Kris Stevens says the store should dramatically reduce the time to market for new content, establishing a new pace of innovation in IFEC. "Developers would then see their ideas flying in a matter of weeks, and passengers will enjoy the same type of diverse, quirky, cutting-edge content they’ve come to expect in other market segments," he adds.

Panasonic says the app store will be the storefront and aggregation point for existing and future applications for Panasonic IFEC systems.  Airlines, through a secure log in, will be able to see apps available and under development and access the community of developers should they want their own apps developed.  Content owners and merchants who want their own applications developed and made available to the airlines will be able to access the app store to reach out to the developer community and have their apps created.

Called the Next Generation Blu-ray and DVD player, part number FD932DVD-BLU Version CV, this product is available today for a list price of $5,254. This Blu-ray Disc player is packed with incredible new in-flight entertainment features, including HDMI video output up to 1080p, Component video up to 1080i, and Composite NTSC video. Multiple video outputs ensure that customers can select the best choice for their installation, including standard definition video for legacy monitors without HD support.

Engineers from Flight Display Systems have worked to add 500% more RS-485 commands to this new Blu-ray and DVD player, including all functions currently found on the infrared remote, such as Play, Pause, Rewind, Fast Forward, and Mute. These fully documented commands allow customers to integrate and control the Flight Display Systems Next Generation Blu-ray player using third-party Cabin Management Systems. The Next Generation Blu-ray and DVD player also has the ability to play Blu-ray and DVD movies from any region.

If Panasonic and Thales are the top-tier IFE players, LiveTV dominates the mid-tier players, then Flight Display Systems from Alpharetta Georgia USA is certainly among the top of the small IFE companies. We rank them in the midst of companies such as Custom Control Concepts, Rosen Aviation, and Aircraft Cabin Systems.

The news of a partnership between LiveTV and Iridium caught our eye. From the press release,

LiveTV and Iridium Communications Inc. have entered into an agreement to develop an aviation antenna based on the Iridium OpenPort high-speed communications service... The solution provides up to 128 kbps and three voice channels in an always-on IP configuration.

The planned low capital cost of the LiveTV Iridium OpenPort-based aviation equipment, and cost-effective airtime packages, will enable affordable ongoing, global connectivity to keep crew, operations staff and passengers in touch, according to Moeller, who also foresees a considerable market in the business jet sector.

LiveTV (a company in Florida which was purchased by Jet Blue several years ago) is certainly one of the most forward-thinking IFE manufacturers. If Panasonic and Thales occupy the top-tier of large aircraft IFE suppliers, then LiveTV leads the middle-tier. Stay tuned for details on this. Global coverage at a low cost... combined with their USA spectrum auction rights... LiveTV is certainly serious about internet access in-flight and seems to be staking a major portion of their R&D investments there. The company is notably absent from the VOD market.

IFE Services from the UK has put out a press release announcing a partnership with Sony Computer Entertainment America (SCEA) . IFE Services will begin to distribute the Sony PSP (PlayStation Portable) to airlines. As the release states,

Through this collaboration, IFE Services can work with airlines to add one of the world’s best-selling and most popular handheld entertainment systems to their in-flight entertainment. With on-board access to a PSP system and its broad gaming and entertainment offering, passengers can watch movies and television programmes and play the latest PSP games.

Custom airline branding can be incorporated on the PSP system, which is fully certified for use in-flight. The peripherals were specifically selected for use by airline passengers enabling the PSP system to be comfortably held or positioned on a seatback tray. The PSP system has a high-resolution, widescreen TFT display and a sleek, lightweight design. To provide an enhanced experience to passengers, the PSP systems will be equipped with an extended battery life offering from 5.5 to 11 hours while playing games. IFE Services provides comprehensive crew training and full logistical support and can tailor, load and refresh content to suit airline requirements.

As of 25 May 2010, IFE Services claims to have signed new supplier agreements with six airlines.

A coach class passenger created this dental floss iPhone mount while on a flight from Zurich to JFK yesterday. The passenger wanted to watch a few hours of video on his iPhone without having to crane his view down at the tray table. 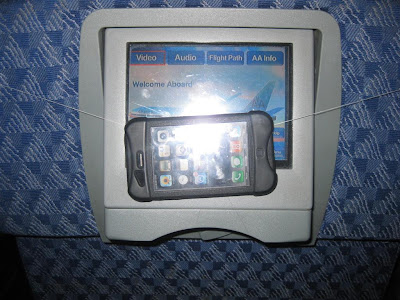 Panasonic Avionics has entered the business aviation sector by offering its new Global Communications Suite (GCS) on over a dozen types of VIP aircraft.

The first installation is planned for next month on a Boeing BBJ with most of the other aircraft 13 types to follow over the next 18-24 months.

Live from Orlando, Florida USA. Here are some IFE headlines from one of the companies making the most news at the show.

Flight Display Systems introduced a new MP3 player for in-flight entertainment systems on Tuesday. The 6-Genre Music Player provides up to 90 hours of music in one compact unit. Six independent memory cards each hold up to 15 hours of music. Each card can be programmed by the user for six different genres of music simultaneously broadcast throughout the cabin.

Retrofit company booming during a bust
from AOPA Online - source

"As the economy turned down, our sales went up," said David Gray of Flight Display Systems located in Alpharetta, Ga. "We’ve put up a new building, and we are hiring engineers." Flight Display Systems is in the retrofit business, providing information and entertainment to passengers. It is a market appealing mostly to owners of larger jets, but the company also counts owners of Hawker Beechcraft King Airs and single-engine turboprops among its customers.

Speaking at the show, Jay Healey, Flight Display's vice-president of satellite systems, said the company has been a supplier of in-flight entertainment parts such as LCD screens and DVDs to the interiors industry, including widescreen TVs and DVD for a number of years and has built a network of around 500 dealers across the globe, many of which have been calling on the company to build a cabin management system.

"Our Select CMS system offers true high-definition video interfacing", he said "and is available for around a third less than rival systems provided by traditional CMS suppliers such as Rockwell Collins and Honeywell. Flight Display will focus its sales effort on the US market initially to eliminate any teething problems. We hope to begin selling the CMS to international markets in around three months", Healey added.

Flight Display Systems, the little guy in the cabin electronics business with a focus on the retrofit display market, is ready for the big time.

At a press conference here this morning at 10 a.m., Flight Display (Booth No. 4484) is to formally introduce its Select cabin management system (CMS) as a retrofit package. According to company president David Gray, aircraft manufacturers are already making inquiries about offering the system as optional equipment on new aircraft.

Gray said the Select system is specifically designed to interface with the company’s high-definition displays and source equipment, including its new Blu-ray player, as well as with source equipment of other manufacturers.

Jet Aviation Basel claims athat 50% of their interior business comes from government customers. So what types of private jets do our world governments fly?

According to the FBOs that handled the incoming delegates for the G20 in London in April 2009:

*Not confirmed if this was from Russia or just a Russian aircraft.

Originally compiled and published in ShowNews on May 12, 2009. Japan 747 photo source. 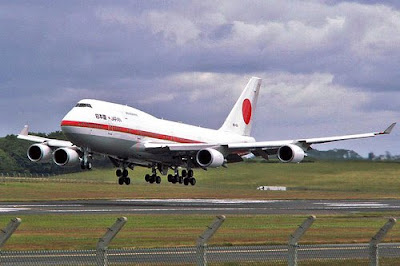